I’m coming to some understanding with myself about how to at least define an issue that’s been nagging me for a few years. It boils down to how to relate to people who suck.

My natural inclination came into effect this afternoon when I was biking, which is a new thing I sometimes do now. A woman was making an illegal 3-point turn in a stupid place in her car, and a biker zoomed past behind her. She yelled at him for being an asshole. I patiently waited for her to properly orient her car and get out of my way, and then continued past and delivered a wiseass retort about how she was the one trying to turn around in the middle of the street, which unsurprisingly didn’t calm her down. I could have just ignored her or more politely pointed out her situation, but as a usual car driver, I felt she was asking to be taken down a notch for being so self-righteous.

Never mind the irony in me feeling the right to tell someone off for being self-righteous. The bigger problem I see here is the issue of whether this kind of behavior has a cumulative negative effect on the goodness of the world. I’ve been subconsciously (and now consciously) trying to figure out how I feel about this for the last 6 or 8 years.

A nice starting point is the hippies’ motto of peace and love. On the one hand, they were so obviously right that everyone should just be nice to each other that it actually does surprise me that it took such a large segment of American society that long to find the right words for it. Plenty of religions and cultures over thousands of years have come to the same conclusion. Eye for an eye → universal blindness, etc. The world would unquestionably be amazing if we just had peace and love all over the place.

But we don’t, and a lot of people explicitly reject this viewpoint. It is totally within our collective power to all decide to be nice to every single other human being, but it’s not happening now, and no matter how much acid we take it doesn’t look like the masses are about to start wearing flowers in their hair. So how should we act toward people who insist on being negative, discriminatory, hostile and greedy? There are a few options I’ve personally been considering.

Option 1: unilaterally disarm. Never mind how anyone else acts. You can only control your own behavior, so don’t partake in negativity towards other people, which only perpetuates the evil they started. Spread peace and love to anyone who is looking for it, and hope that the seeds you plant will eventually grow. Maybe disconnect entirely from the nasty parts of society and create a parallel good one. Serenity is its own reward. Ignore angry drivers.

Option 2: preach the gospel. Actively try to spread positivity and goodness. Work towards understanding between neighbors, who might start out not wanting what you’re offering. Try to improve society by participating in the good aspects of it. Maybe you can make the world a better place by reaching even one person. Be extra polite to stupid drivers, who might be having a bad day.

Option 3: strike back. Enforce your version of justice against the wicked. Drop wiseass remarks on asshole drivers, send photos of tubgirl to evil corporations, order deliveries of animal shit to racist police departments, deface their websites and post their home addresses. It’s unlikely that they’re actually going to have to reckon with Saint Peter (or be reincarnated as a cockroach or whatever your particular belief system suggests), so we better serve them their commupance in this life.

Maybe you can guess from my specific examples which option I enjoy. Which one I *should* choose, though, I believe is related to the question of “for good or for awesome?” 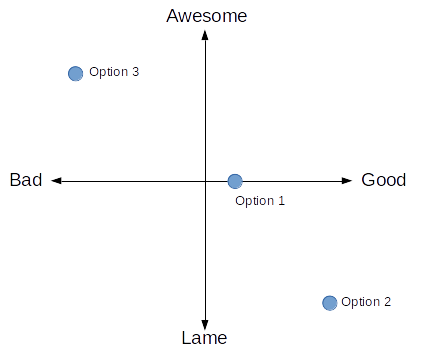 Shitty people totally deserve to be trolled, and I’m happy to do it. It’s hilarious and fun, and at the end of the day I just don’t feel bad about it. But it doesn’t actually make them or the entire world less shitty. There’s that whole “everyone ends up blind” thing. At best, it is neutral on the good-bad spectrum, but let’s be honest, it’s probably bad. The Dalai Lama and Jesus and Gandhi and an awful lot of other people have thought this through, and they have something of a point.

Trolling and violently spreading your version of right and wrong is basically vigilante justice. Internet anarchists happen to share enough of my politics that I’m usually down with Anonymous, but I wouldn’t be as psyched about some reactionary militia taking to the internet to go after LGBT websites or something like that. It’s pretty silly to claim a monopoly on right and wrong. On a day to day basis, there’s some value in trying to coexist with people you disagree with.

Option 2 finds its way to the Good-Lame quadrant mainly by being hard, and potentially preachy. Here again you may be assuming you’ve got the right/wrong situation all figured out. Spreading understanding, say among your actual immediate neighbors, is a good way to go, but much harder than distancing yourself from conflict and directing your virtue inward so as not to continue the cycle of negativity (option 1).

The main question I’m working on right now is just how bad option 3 is. If you’re talking about actual violence, clearly that’s bad. But trolling people who were already inclined to do bad things? Is sending around packages of poo really going to lead racist cops to commit more murders than they were already going to? Is exposing all those Uber employees to tubgirl really going to lead the company to more strongly support the next military police convention? I don’t want to believe so, but I’ve got to consider the possibility.

Peace and love are great. But what are we going to do about all these bad people?